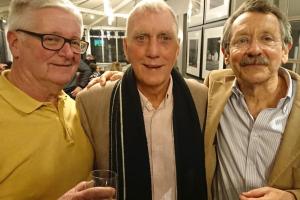 It was the last session of my ‘writing class’ on Friday and I wrote the following. I thought it paled by comparison with the efforts of the other attendees but they were nice about it and our teacher said it was ‘excellent’ which is even nicer. We will be continuing to meet informally as a group so I should continue to post these posts.

‘I attended school at Hawarden Grammar School for a little over seven years. They weren’t bad years by any means and they certainly gave me the platform for my later life. But I’m not sure that I subscribe to the idea that your school days are the best days of your life.

Both my parents attended the school which meant a handful of teachers also taught them. And because people in those days tended to stay close to their communities several were at school with one or the other.

Like many schools the buildings were a bit of a jumble. There was a central core from the early 1900s and then the school spread with more classrooms, laboratories and the school hall. There were pre-fabs for the canteen and then another four classrooms added with a revolutionary second floor when I was there in the 1950s.

My first class was 1A and we were in room 18: the room with the clock. It was one of a suite of 3 separated by movable partitions which I never saw moved. They served as the ‘wet rooms’ for when it was deemed to be too wet to be outside during break time. Being the room with the clock was significant because one of our number became ‘bell monitor’ which meant that he, it was a boy, got to go and ring the bell to mark the end of lessons.

It was a whole new school experience of course. 900 pupils versus just a hundred or so in primary school, new subjects and multiple teachers instead of just one. The teachers themselves seemed more distant, half of them spoke Welsh and many wore academic gowns. They swept in and out of lessons in a cloud of chalk dust.

And for a comparison with today there were over 40 children in each class and teaching assistants hadn’t been invented.

In my second year I was in class 2A in the Geography Room. I don’t know how much geography got done there but it did have a globe hanging from the ceiling and maps on the walls. We took most of our lessons there but enjoyed the thrill of General Sciences in the General Sciences laboratory.

By then of course we were all a little bigger and wiser to the ways of the school. But we knew our place and the teachers kept us there with a little light corporal punishment when it was deemed necessary. It wasn’t just the cane, and anyway that wasn’t such a big deal because we’d got used to that at primary school, it was also the fist and the flat of the hand. It wasn’t all teachers and different ones had their own means of discipline but our form teacher in year 2 was a fully paid up member of the tough teachers union

Year three was a big change. I was in class 3S, that’s S as in science, and although we still had a room which we called ours we took many lessons in the Chemistry and Physics labs and whereas 1A and 2A had both been 50% each boys and girls in 3S there were only 5 girls in a class of 40 plus.

It was the late 50s and education was segregated with boys and girls being largely kept separate. Girls were not expected to do science and boys were not expected to do languages which is why there were only 2 boys in 3L. The other science form 3A was all boys and the other one for language had only 2 boys in it. Note the subtle nod for boys being superior to girls 3A vs 3B. And looking back although 1A and 1B and 2A and 2B were mixed 1C and 2C were all boys with 1D and 2D being all girls.

Outside lessons the canteen was segregated as was the playground. And at lunchtimes only boys were allowed to go to the ‘tuck shop’ so if you were of a mind to you could earn useful pocket money from girls willing to pay for you to make purchases for them.

Our two science teachers were the Doctor Jekyll and Mr Hyde of Hawarden Grammar School. Doctor Nora Lumb was a plain spoken Yorkshire lady with a fiery temper. She had a shock of red hair, stood 5 foot nothing and was reputed to call for a stool when she wanted to punish one of the six foot miscreants whom she taught. However she taught with a passion and my love of chemistry came directly from her.

JS Williams had a lisp and we referred to him as John Tham. He was missing part of a lung and taught sitting down. He didn’t resort to physical violence because he had a much more powerful weapon: sarcasm.

The base for 4S was the biology lab which meant that we had most lessons somewhere else and sometimes these must have been combined with other forms because we had options. Even though we were in the science stream we still did one language and we had a choice French or Welsh. I chose Welsh. We lost Geography and History completely but we could do metal/wood work. Or Latin. For some reason Latin was deemed important if you wanted to go to university and the top 15 in the class had Latin chosen for them.

In the fifth year we found ourselves in Hut 29, one of a pair of rooms apart from the rest of the school, and named after the soldiers’ accommodation in the Army Game which was on TV at the time. They had electricity but no heating except for a stove in the middle which served both rooms. In the winter it got pretty cold so we relied on the stove which roasted the people closest to it whilst those further away continued to freeze.

The other building set apart from the rest of the school was the prefabricated structure which housed the canteens and the kitchens which served them. Within each half there were lines of tables seating 8 with senior boys and girls at the end sharing out the food which was collected in bulk from the servery. There was no choice and I remember mashed potatoes most days which stuck in your throat and custard of various colours with thick skin on the top. Where was Jamie Oliver when you needed him?

The teachers ate with us. Males with the boys and females with the girls! One of our teachers told us once how he’d been reprimanded for complaining about the quality of the food. He said that it tasted like it came in oil drums. I think he was being kind.

All this talk of forms is of course alien to people today who talk of years. The transitions were the same though. Year 7 is now and was then the first year in secondary school and year 11 was the year then when you did your GCE O levels. Now it’s GCSEs. For some reason we continue to refer to years 12 and 13 as the 6th form.

So we did O levels when we were in 5S and then about 60% of us left. Sadly those that did were the ones who got to the grammar school by dint of good primary school teachers but then slipped back because they were insufficiently motivated to put in the extra work for which the grammar school asked. Just at the moment that the school could have done its bit to address inequalities it didn’t. Those that were left were largely the sons and daughters of the middle classes.

Those who stayed on did so out of choice and the relationship with the teachers changed. We were more mature and we were bigger. We were also drawn into the disciplinary system by being made prefects and given powers. These didn’t amount to much but as with John Tham’s sarcasm holding a toughie 4th former up to ridicule by making him sing hymns at the prefects’ meeting might have scarred him for life.

As luck would have it I was due to do three years in the 6th because, it was believed, that’s how you got into Cambridge. But then I got my place awarded early in September with the advice to take a gap year. It was great advice and I took it. I wouldn’t say that my school days were unhappy, far from it, but I started to enjoy life more when I left them behind me.’

The photo above is of me and two contemporaries at the ‘reunion’ earlier this month. Left to right: Phil Thomas, Keith Dodd and me. The reunions take place on the third Friday in November. Click here for my post about the 2009 reunion.

7 thoughts on “Days of my life”