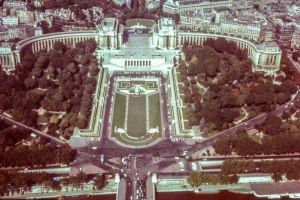 My first real camera was a Halina 35X (I had a Kodak Brownie earlier). I inherited it from my father and it was a great camera to start with as I learned the basics of exposure, shutter speed and ISO ratings (although I think we talked more about DIN in those days).

It was a basic 35mm viewfinder film camera and for some reason you had to ‘cock’ the shutter before every photograph. If you didn’t you lost the shot. I lost a fair number. Of course there was nothing automatic about it so you had to estimate the distance for focusing and if you wanted to get the exposure right you used a separate exposure meter or referred to a printed set of exposure tables. Some of my photos from those days survive, they’re all slides and a lot of the colour has gone with age. I have a few from a visit to Paris including the one featured with this post.

I moved up to a Halina Paulette Electric (I think) in the late 60s. I was at Uni at the time and I seem to recall it cost about £12. It was another viewfinder film camera and the big step forward with this camera was an onboard ‘uncoupled’ light meter. That meant I could discard my handheld exposure meter and/or exposure tables but I still had to set the exposure inline with the reading of the onboard meter (hence ‘uncoupled’). I would have used this camera through my university days and up until about 1974. All my early Japan and Hong Kong photographs were taken with it along with those of Cambridge and other places closer to home.

I bought my first SLR in Singapore on one of my first trips to Indonesia when I worked for Mobil Oil. It was a Minolta, I guess it was an SR-T 101, and I remember walking nonchalantly through customs at Heathrow trying to look like I’d owned it all my life.

This was a real camera. It came with a 1.4 lens, through the lens (TTL) metering and microprism focusing. The latter enabled focusing through the lens as well. As a photographer you still had plenty to do but you had most if not all the information which you needed to be able to do it visible through the veiewfinder. Buying my Minolta coincided with my switch from slides to prints and I’ve got lots and lots of albums dating back to when I got this camera until I went fully digital later (see below). And as I was now in the SLR space I could invest in multiple lenses so I acquired a 400mm telephoto and a wide angle lens.

In 1979 I took another big step forward when I bought a Minolta XD-7 (or similar) which gave me automatic exposure setting. I sold my 101 privately along with all my lenses and used the opportunity to buy my first zoom lens. It didn’t extend to covering for a prime lens, so I still needed to carry multiple lenses with me, but it did have a macro setting.

I’m not sure why but early in 2003 I traded my XD-7 in for a Minolta Dynax 5 which also gave me auto focusing. I’ve still got it but it’s no longer in use. I just figure that one day someone in the family will do a photography course which will require them to use a film camera.

I moved to digital in February 2006 when I bought a Sony alpha 100 in the US. It was stolen in 2006 when we were on vacation in Bali. It was a good ‘entry level’ digital SLR with max mega pixels of about 10 and ISO going up to 1600. In those days I seem to recall being able to buy Fuji ISO 1600 film so there was no great leap forward on that score. The great thing about going digital of course is that your lenses get a nominal 50% increase in length so my max 300mm focal length zoom became max 450mm.

In December 2008 I bought an alpha 300 which served me well until the back screen gave up just after we returned from our first Australian trip. In terms of spec it wasn’t really much of an advance on the alpha 100 and as I’ve been researching for this post I find that it was sold as a special by Jessops. If I’d known at the time I probably should have bought an alpha 350.

Campkins in Cambridge told me that replacing a screen would cost almost enough as a new camera and did me a deal on an alpha 58 in May 2015. This was my first SLT (single lens translucent) camera. Spec-wise it was a nice step up giving me 20 mega pixels and 16000 ISO.

Finally (for now) I bought my current alpha 77 II in December 2017. I wanted a little more ISO and a few more pixels but I wasn’t really looking for the sort of semi-pro camera that many enthusiastic amateurs buy. I also wanted a camera which I could to some extent network and control remotely and this one does the trick.

So where does this leave me? I started with Minolta because it seemed at the time to offer the easiest ‘user interface’. So I’ve stuck with them and then when they went to Sony I became a Sony user because I could carry on using my lenses. Unfortunately Sony has now introduced the E mount lenses, my camera uses A mount, and it seems that’s where they are going to be investing their time in the future. So have a got myself into a cul-de-sac? Does it matter?

Btw in parallel to using an SLR I’ve also been using a pocket camera which I’ve always carried with me. My first was the incredible Rollei which was made in Singapore. Sadly I lost that and replaced it with other pocket cameras before going digital in 2004 with my first Casio. Since then I’ve had a Nikon and now a Sony but given the quality of photos I get from my phone I use it infrequently. However I am tempted to get another simply for the optical zoom on offer.

One thought on “all the cameras I’ve owned ….”