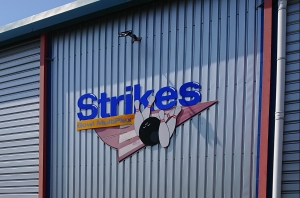 I don’t know how long the Strikes bowling alley has been in Ely or how long it’s been there but it is no more. A week or so Cambridgeshire County Council took it over and is converting it into an archive centre.

I visited the site this morning and it got me thinking. I’ve done a bit of bowling in my time, but not recently, and I got to thinking about my record. It’s not been bad.

I guess bowling ‘took off’ in the UK in the late 50s and 60s. It was a US import and fashionable at the time. It seemed impressively high-tech. Most largish towns had a bowling alley, often a converted cinema, and the one I remember was in Chester. It was there that I ‘learnt’ to bowl.

I got serious when I was at Uni in Cambridge. My mate Ed Libbey and I somehow found out that there was a university bowling league based on the Magnet Bowl down Mill Road the other side of the railway bridge. There seemed to be no team from Churchill College so we registered. I became captain and Ed became secretary. As luck would have it Churchill had a bunch of US post graduates who joined us and soon we had several teams and I remember us topping the first, second and third divisions with several of us bowling for the University. I was one and still have my Cambridge University bowling shirt. One of the others was an American post-graduate called Doug Lind who bowled a mean slow ball and consistently scored in the high 200s.

I seem to recall the league only lasted a year or so before the bowling alley closed down. It probably closed mid-season so our league exploits would never be surpassed.

Four of five years later I found myself in Jakarta, Indonesia where there was an ‘oil patch’ bowling league with teams from the various oil companies operating there.  I was working for Mobil Oil at the time and we entered a team. I don’t think we won the leagues but we did pretty well. My team mates included Harold and Goldie Inman and Jennings Allen who were senior to me in the company and may now be competing at that great bowling alley in the sky.

More important though you could drink whilst you were bowling. I don’t know if I got any better but my bowling certainly got more vigorous with a couple of bottles of the excellent Guinness brewed locally.

In the late 70s I pitched up in Hong Kong and my company ran a bowling league of sorts at an alley somewhere at the back of Happy Valley. It was again an alcohol fuelled affair although this time it was San Miguel and I seem to recall some successful evenings again. I remember bowling with Gordon Turner, who said he was impressed that I did so well with a ‘house ball’ (I averaged 200 or so) and Bob Anderson.

And that’s been it. I’ve bowled just a handful of times since but it’s all be social. I can’t see myself ever doing it seriously again. Especially when they close down places like Strikes.